March brought with it one of the most terrible volcanic eruption of the early modern period. It happened around the 8th of March, 1669, in the lands of Sicily, terrorized by their eventually active phoenix: Mount Etna.

“Multiple eruptions over the next few weeks killed more than 20,000 people and left thousands more homeless. Most of the victims could have saved themselves by fleeing, but stayed, in a vain attempt to save their city”[1]. For those that might not know the circumstances of the events, let me introduce you quickly to the topic.

During the muslim occupation of Sicily, between the 9th and 11th century, this place used to be called Gibel Uttamat, which means mountain of fire [2]. The people from medieval times clearly knew about the dangers of living in that area, and still they did not move away. Why? Well, there is a clear reason. It happens that the area of the alluvial soils near by this mountain, in the Plain of Catania and near by the mouth of the River Alcantara, are one of the most fertile of the whole region[3]. And we all know how important is agriculture today…Imagine in the pre-industrial times! It was something vital.

Thus, the people from these lands co-exist with the threat of rivers of lava and ash clouds…Thus, when the Etna started to make the earth move, people did not leave. The village of Nicolosi was soon covered by tones of lava[4] making its way to a bigger town: Catania. Knowing about the fate of Nicolosi and smaller communities, a group of citizens leaded by a man called Diego de Pappalardo, decided to go up to the volcano and try to divert the flow of lava[5]. In relation to this, there is some controversy about the conflict with the people from the area of Palermo.It is believe that the people from the southwest area knew about the movements up at the Etna and noticed that the changes on the lava-river flow would lead the deadly substance to their fields. Thus, the citizens of this area “literally fought back the Catanians, while the lava break hardened and filled again”[6].

After this issue, a law was established in Italy forbidding the interference with natural flow of lava, that lasted for over hundred years [7]. And this, you would think, is the end of the story. However, I am afraid to say that it is not. The Etna has erupted several other times before and after this, and the reaction towards this events have not being precisely giggles. But this is not the reason why I am talking today about the Etna, or why I think it is relevant.

As I am sure you all know, the 11th of March this year, a terrible earthquake and tsunami have made the Japanese population being scared. It was the 11th of March of 1669 when the Sicilian people could see with their own eyes that the signs the full-of-liquid-anger mountain had been sending, were quite real. I have to say that when we were planning the updates for this month the Etna was on our list…but this was on February, and there was no possible way to know this horrible thing would be happening on the other side of the world…

With this post, me, and the whole team, want to send our support to our Japanese friends here in England, that are so far away from home and are grieving for their relatives and friends. But also to every single human being affected by these events, wherever they are.

And for those of you that are reading this, please think about what I am going to send next. Nature, as history, repeats itself. Sometimes even at the same time of the year, or place…Sometimes not. But it is there. We should not try to play God, as the people of Catania did, because we do not know the consequences it might have. It might save us, but it might kill others. Nonetheless…We can learn a lesson from the past, be aware of the terrible catastrophes that have already occurred and be ready for the ones that surely will come.

Because, as long as the planet exists and we populate it, things will happen…And so history will be written. The worst we can do is decide that both nature and history simply do not happen…

For those that like to have some sort of visual references of historical events, I recommend to take a look at this: 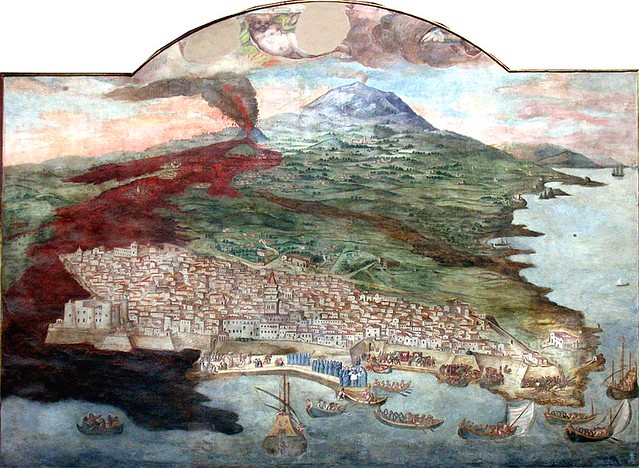 It is a flickr photo gallery with a section on the fresco attributed to Giacinto Platania, in the Cathedral of Catania, in which the events that took place in March, 1669, are represented.