Before I start this blog post as part of our culture month, I would just like to remember what a great man Nelson Mandela was. The man who sadly left us on 5th December 2013, was finally free. For many years of his life, he had been battling not only the pro-Apartheid government, the Nationalist Party, but in later life illness. Mandela battled for the rights of a society in his country throughout his life, and although in the early stages of his career he may have taken a militant view, we should always remember that this one man helped to free a nation.

As part of W. U Hstry’s culture month, I will be looking at how the 1995 Rugby World Cup in South Africa helped Nelson Mandela to gain popularity throughout not only the country, but further his image across the world. It is something which in recent culture has been highlighted in the film Invictus, staring Morgan Freeman as the man himself and Matt Damon as Pienaar.

Freeman and Damon in Invictus.

The Rugby World Cup came at convenient time for Mandela during his presidency: the type of sport which it was hosting, Rugby was usually an Afrikaner sport (Afrikaner’s were white speaking South Africans usually descended from the Dutch Boers). Although in power, Mandela had not managed to unify the whole country yet. He was still being judged by the Afrikan community, who believed he was a terrorist. This is understandable considering his history in the group the ANC, who did state that because the ANC were being violated against, that they would retaliate using violence. This is shown in the video link below, which is of Mandela in his first television interview on ITN.

Therefore it is easy to see that Mandela really had his work cut out for him. In the film Invictus, this is very much illustrated clearly, how much of a divide there was in South African society. It was clearly stated in the film how ‘the whites are cheering for the Springboks’ and how all of the blacks were ‘cheering for England’  in a pre-World Cup match in 1994. To the black population, for so long the Springboks had been an image of apartheid. Mandela knew this, and knew that in order to get a united nation of South Africa, he would have to change this perception. However he also knew that if he destroyed the Springbok logo completely, then it would lead to uproar and create further divisions. By being able to unify something that caused such difficulty, it helped further Mandela’s profile as a leader not only in South Africa but the world.

The Springbok logo which reminded the people of apartheid.

Mandela knew that in order for the barriers to be broken down, work had to be done from a grass roots level to break down the stereotypes. In order to do this, he made sure that the team did training with the children in the slums. Many of these children did not know the rules of rugby due to the fact that it was stereotyped as a rich Boer sport, whereas they knew how to play football. Therefore through having the training, it not only helped the players to see who they were truly playing for, but it helped break down the racial stereotypes on both sides which existed. This illustrates that Mandela did use the World Cup and the South African rugby team to his own advantage, because as shown here, they are helping to destroy the stereotypes that were in place and helped unify the country from a grassroots level.

Image from the film Invictus of the South African team training with the children.

Through having the rugby team themselves being at this level, it helped make the rest of the Boer population get behind their team. The team itself ended up being a symbol of unity and a symbol of the rainbow nation that South Africa was. This was illustrated through the fact that in the team itself they had a black player, one Chester Williams. Through having a black player in the team, it helped Mandela put forward his idea of a united nation, the rainbow nation that South Africa was becoming. It was this as well which helped Mandela’s popularity grow because it was a living symbol that was playing in a sport which was so important to his rivals and disbelievers.

It was well seen in the film how important the Rugby World Cup was to Mandela and how he knew he could be able to impose his beliefs through it. In the film Invictus it was very much shown through how Morgan Freeman’s Mandela would book dates into his diary for whenever the South African team played. It emphasises just how important this tournament was to his time in charge of South Africa. By having a tournament, it allowed the country to unify, forget about the past and instead take arm in arm and help roar on the Bafana Bafana to win. Through having this unified nation, it helped Mandela to further his profile and importance across the world.

The iconic image of Mandela in the Rugby World Cup final in the Springbok shirt and hat, just highlighted how far the country had come. With the team themselves now singing the anthem, which they had taken time to learn about the meaning behind it, it helped South Africa as a country to be on the step to unification, to better times ahead. All these events illustrate just how important events such as sport are, how they have more than just physical meaning; they can unite a country and break down racial stereotypes. Sure, you can argue that it was just a Rugby tournament, they happen quite regularly, but the background to this one and the results of it, helped to create the new rainbow nation of South Africa, it helped to create a better future, and break down the nightmare that was segregation.

The Iconic image of Mandela in the Springbok jersey 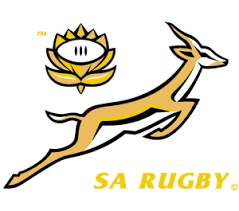